A Path Worth Remembering

Growing up, my husband Adam and his family would spend weekends and vacations touring the country visiting filming locations from their favorite movies. He has wonderful childhood memories from that time in his life. As for me, I love to travel, but I didn’t often have the time. I’ve always wanted to go to new places, so after I met Adam, he took me on an adventure to continue his family tradition in Mansfield, Ohio where The Shawshank Redemption, his favorite movie, was filmed.

Based on the novella Rita Hayworth and Shawshank Redemption, by Stephen King, the 1994 movie, The Shawshank Redemption tells a story of hope and lasting friendship in the face of adversity. Sentenced to two life terms for the murders of his wife and her lover (a crime he didn’t commit) Andy Dufresne (Tim Robbins) experiences the harsh reality of prison life. At Shawshank Prison, prisoner Ellis “Red” Redding (Morgan Freeman) befriends Andy. Ultimately Andy escapes through a tunnel that took him 19 years to carve out.

We discovered The Shawshank Trail, a series of 15 locations in Mansfield and the surrounding area where the movie was filmed. We downloaded the Shawshank Trail brochure & map, and discovered that all 15 sites along the trail have a “Movie Site” sign so they’re easily identified. Adam had the idea of taking pictures to match scenes from the film; so needless to say, we were excited to get started.

The Ohio State Reformatory, site of the Shawshank State Prison

On our first day, we started at the first site, the Ohio State Reformatory, where the Shawshank State Prison scenes were filmed. It’s also here that Andy utters Adam’s favorite line to quote, “I guess it comes down to a simple choice, really. Get busy living or get busy dying.”

It’s also here that Andy utters Adam’s favorite line to quote, “I guess it comes down to a simple choice, really. Get busy living or get busy dying.”

The stately reformatory looks just as it did in the movie, almost out of place in the rolling, green hills of northeastern Ohio. Nicknamed Dracula’s Castle, its imposing and ornate architecture makes it seem more of a grand castle than a former prison. I get a little chill just staring at it. That the Reformatory is supposedly haunted only adds to the eeriness.

There are several different tours to choose from, both guided and self-guided, and we opt for the History Meets Hollywood Tour. Along the way, we retrace the footsteps of main character Andy Dufresne and the rest of the Shawshank prisoners as our knowledgeable guide takes us through Warden Norton’s office, prisoner Brooks’ hotel room and the parole boardroom. We take photos of each and think about what it would be like to lie on hard cots in our own cells. We looked into Andy Dufresne’s escape tunnel, and I imagined the film production as well as the experience of the character, desperately crawling to freedom.

We leave the reformatory and continue, only two miles, for a tour at the Bissman Building, the site of the Brewer Hotel (where Brooks, the elderly prison librarian in the film, stayed after his release) and the Portland Daily Bugle newspaper. We found out that the outside and inside of the building was used in the movie for both purposes; the actual room where Brooks hung himself was filmed at the Reformatory.

At Carrousel Antiques in downtown Mansfield, we peer through the same window Red peers through when he sees a compass that later leads him to the oak tree. At Central Park, we sit on the bench where Brooks fed the birds in the film. I take a photo of Adam sitting in the same spot and add it to our collection. As we head to the next site, we drive past the Renaissance Theatre, where moviegoers and celebrities sat for the movie premiere on September 13, 1994. 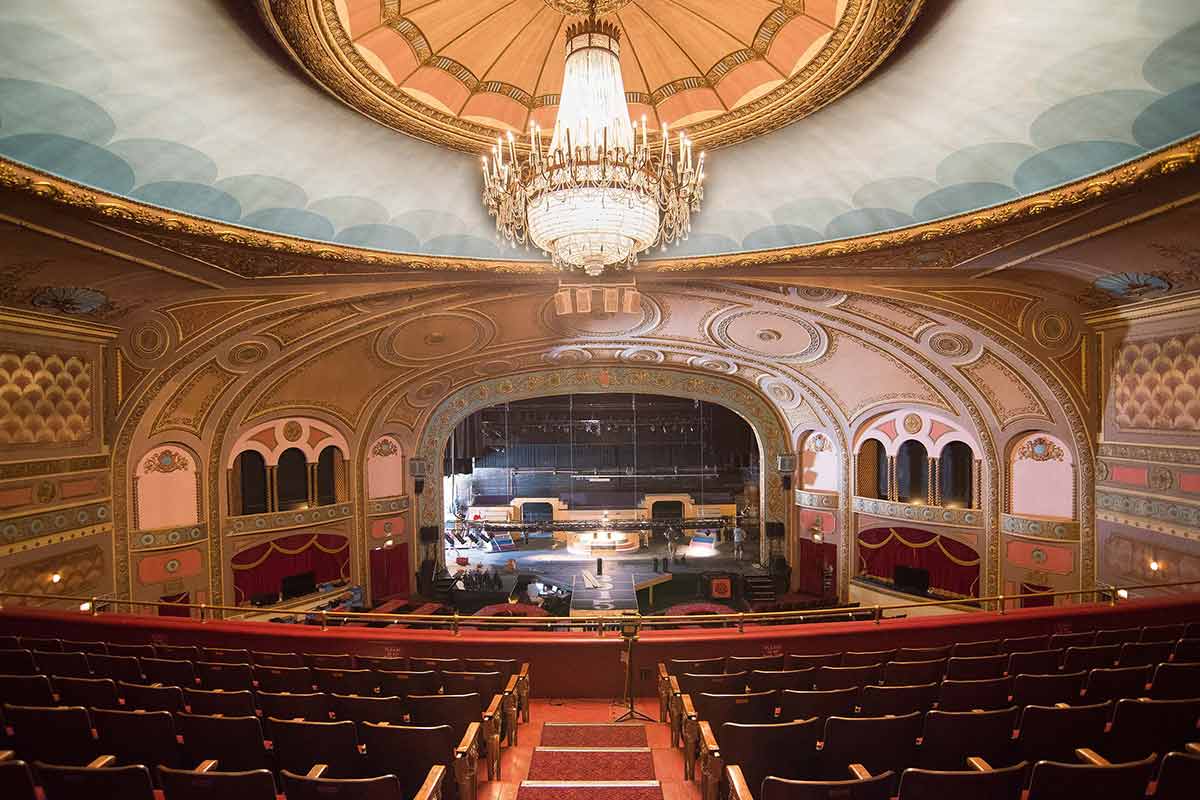 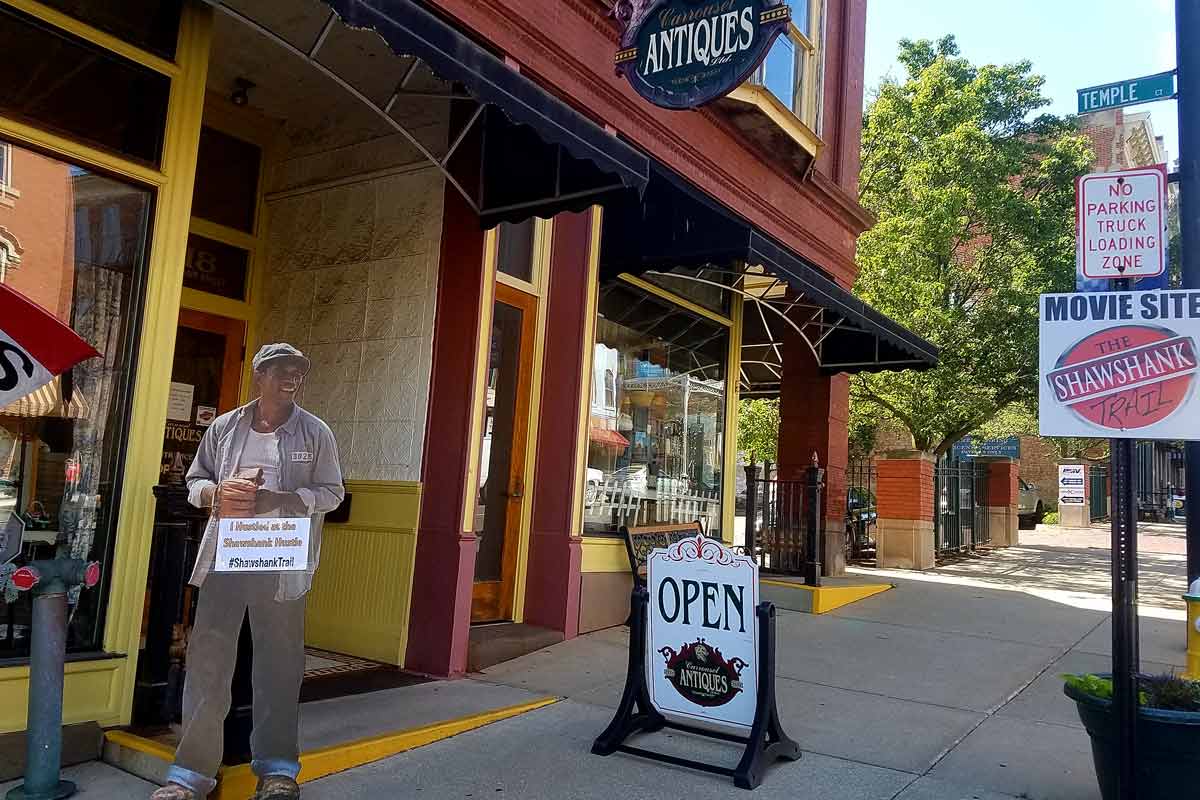 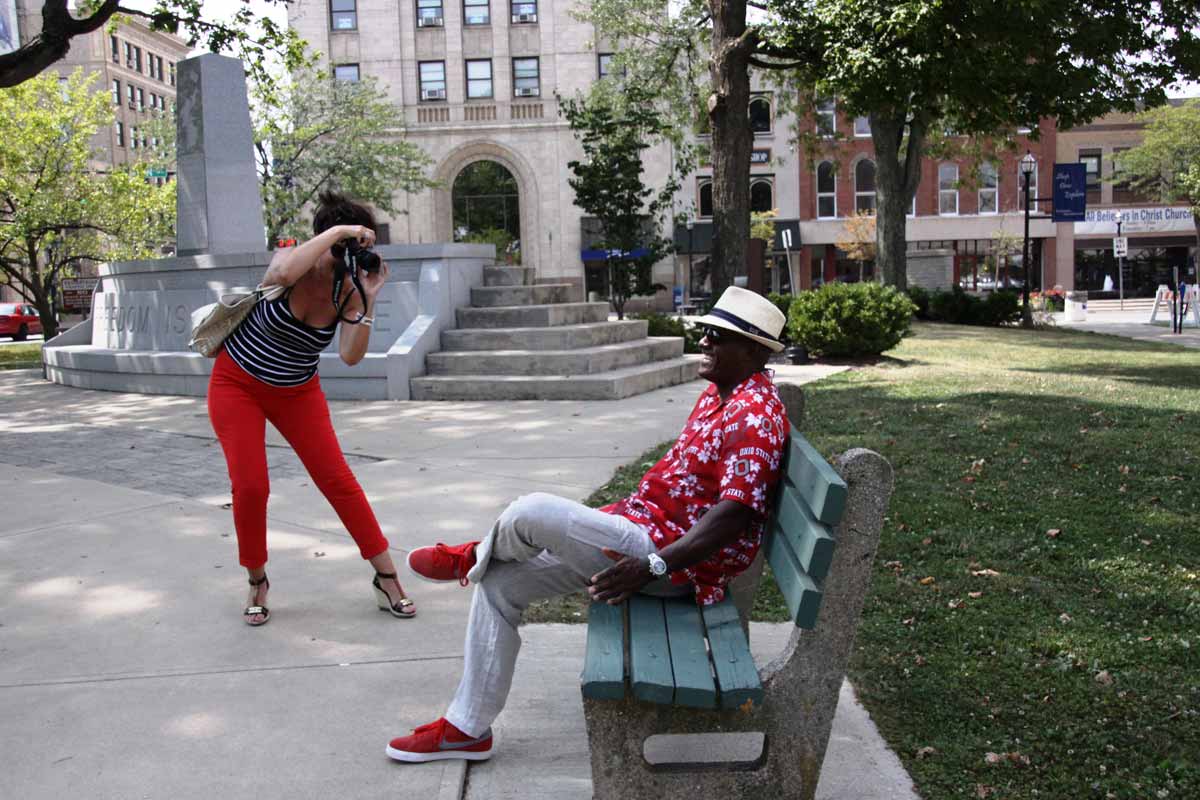 Site of Road to Buxton 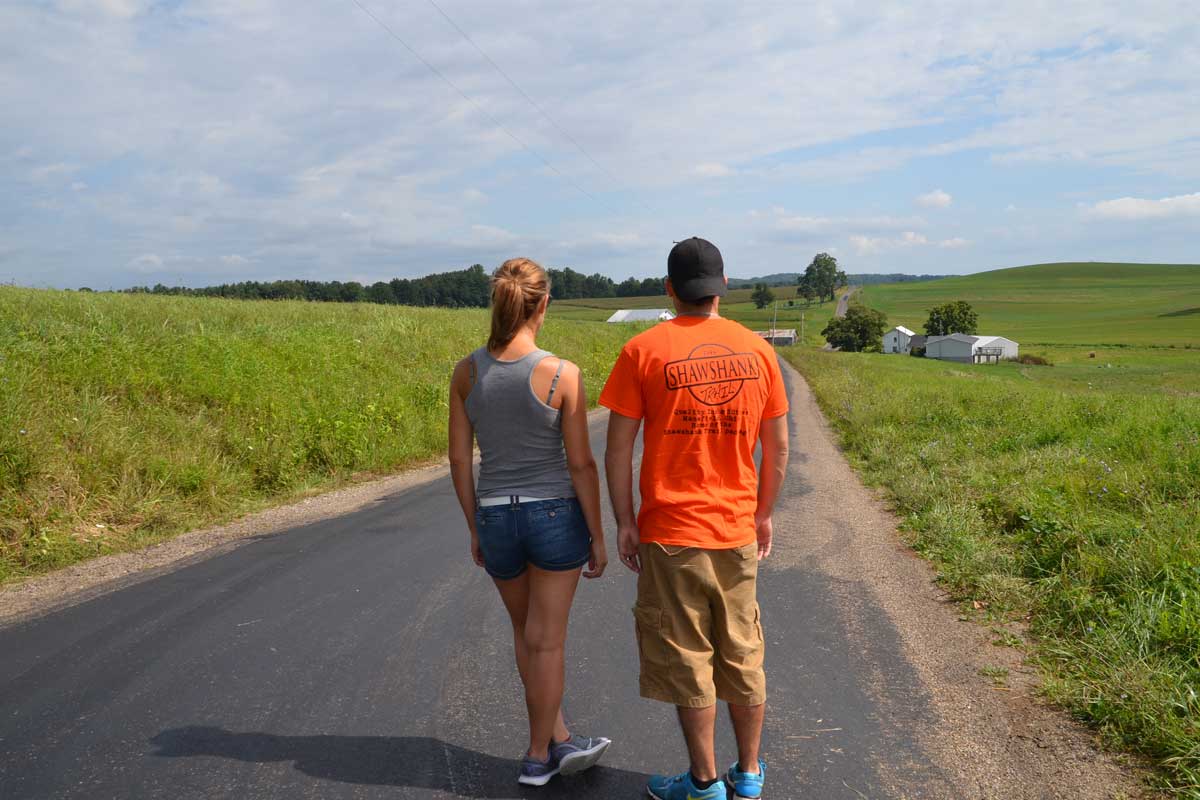 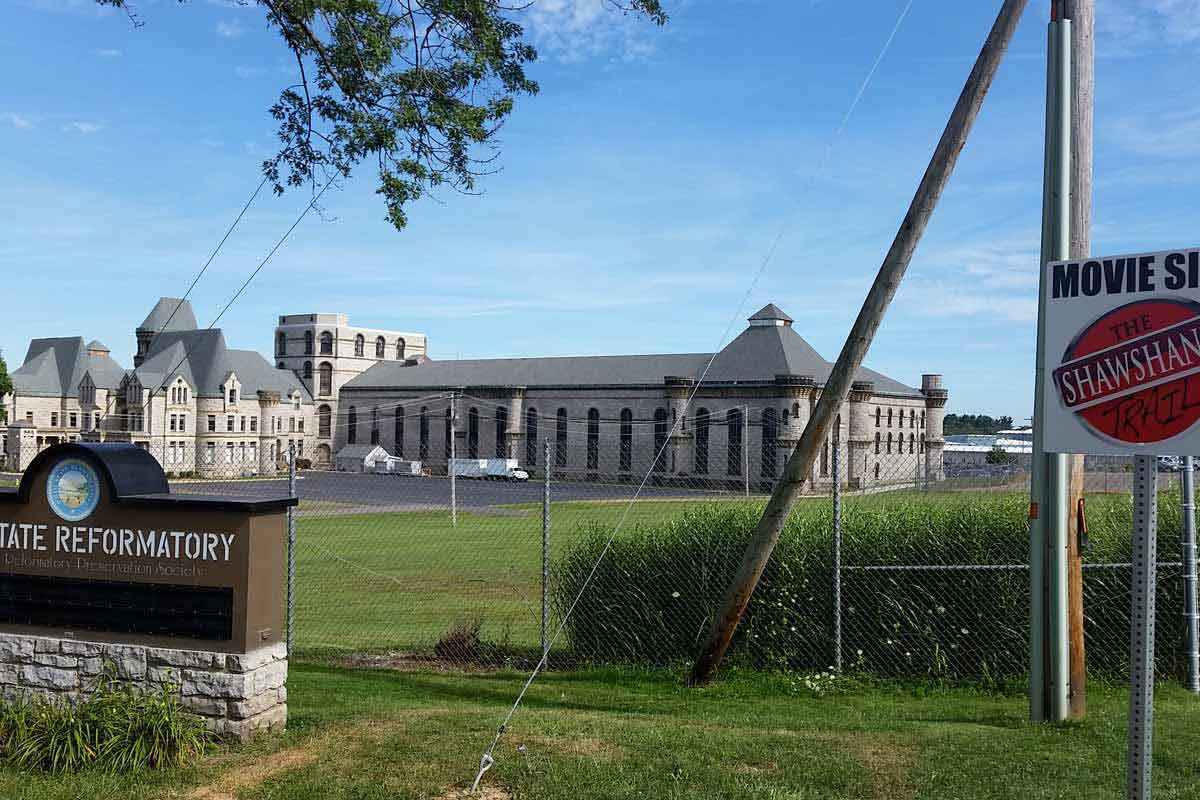 Adam drove a bit down the road towards Buxton as Red did at the corner of Snyder Road and Hagerman Road in Butler and I snap a photo. A mile farther, we stop and see the barns and trees that Red looks at as he rode the Trailways Bus to Fort Hancock after being released from Shawshank. I can only imagine what it must have been like for Red, who after years of prison life, was finally on the outside.

With our first day drawing to a close, we drove back to Mansfield to check in at the Quality Inn and Suites, where we had booked a Shawshank Package. We then headed for a quick bite to eat. A variety of options were available, including the Wine and Ale Trail in Mansfield.

We get an early start the next morning and head for the Shawshank Oak Tree where Red dug up the money Andy left him. The film location is on a private farm and unfortunately; the 200-year old tree blew down in 2016. But yesterday we learned about Natural Wood Mirrors, an Ohio business, which makes amazing souvenirs out of the actual oak tree. I bookmark the website, as I know this will make a perfect birthday gift for Adam.

Across the street is Malabar Farm State Park. The farm is home to Louis Bromfield, Pulitzer Prize winning author, farmer, conservationist. The location is also the wedding site of movie stars Humphrey Bogart and Lauren Bacall. Stretching across 1,199 acres, everything we can see is part of the farm. It’s still a working farm and we notice soybean crops sprouting up from the fields and Hereford Cattle and Nubian Goats grazing in the pasture. The Big House, which rivals many southern plantation homes, is where James Whitmore (Brooks) and Clancy Brown (Captain Hadley) were given a personal tour during a break in filming the movie. Walking along the creaky wooden floors, we get a glimpse into life in the early 1900s. 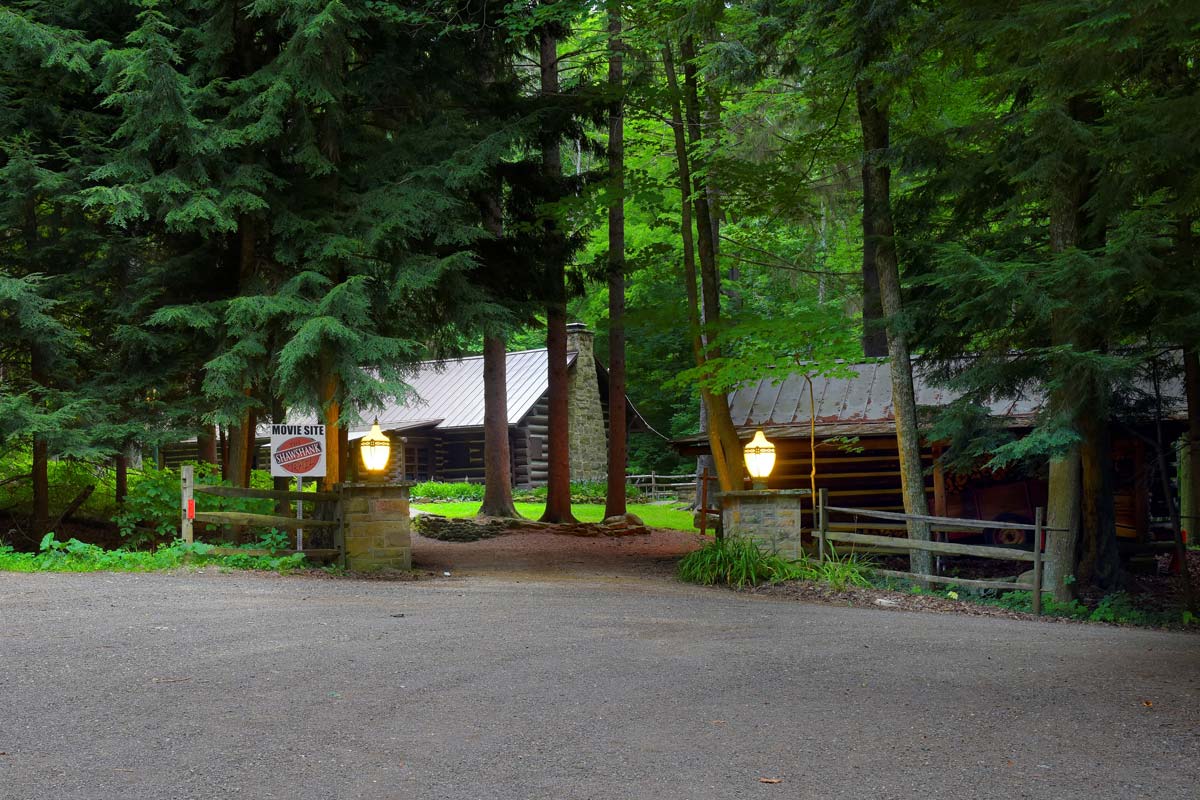 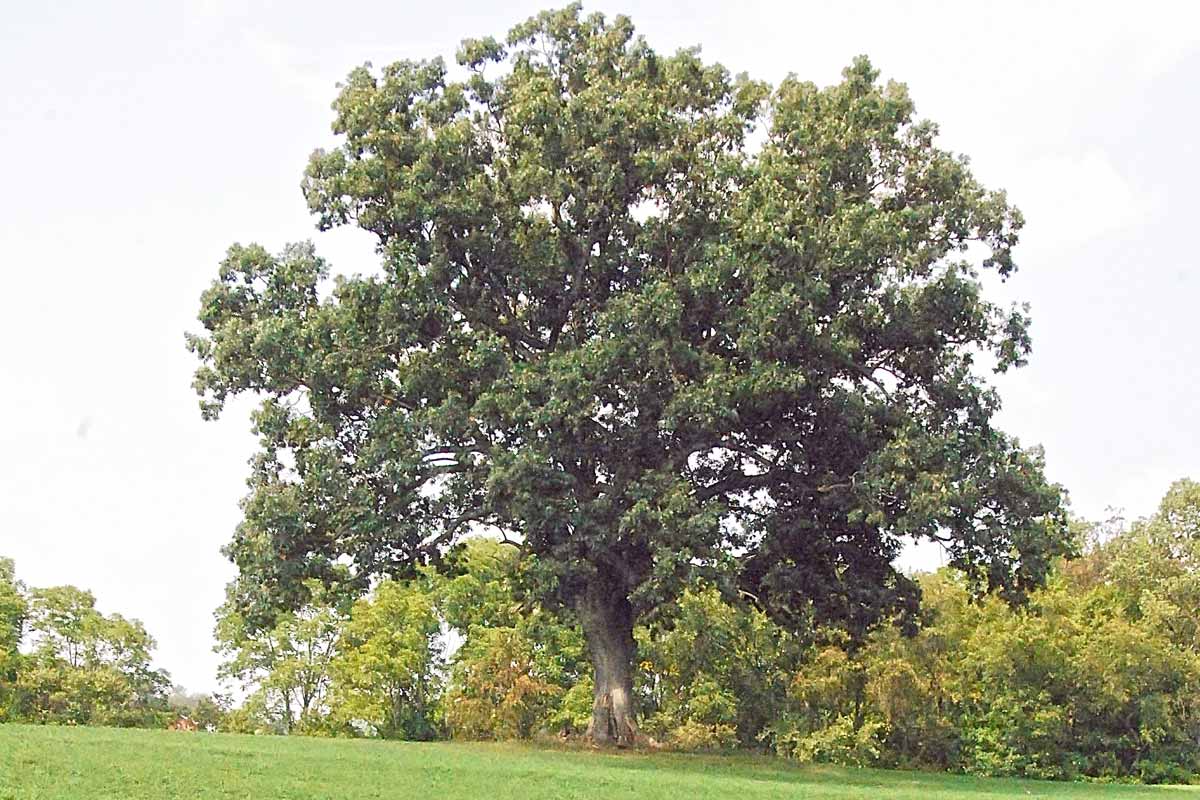 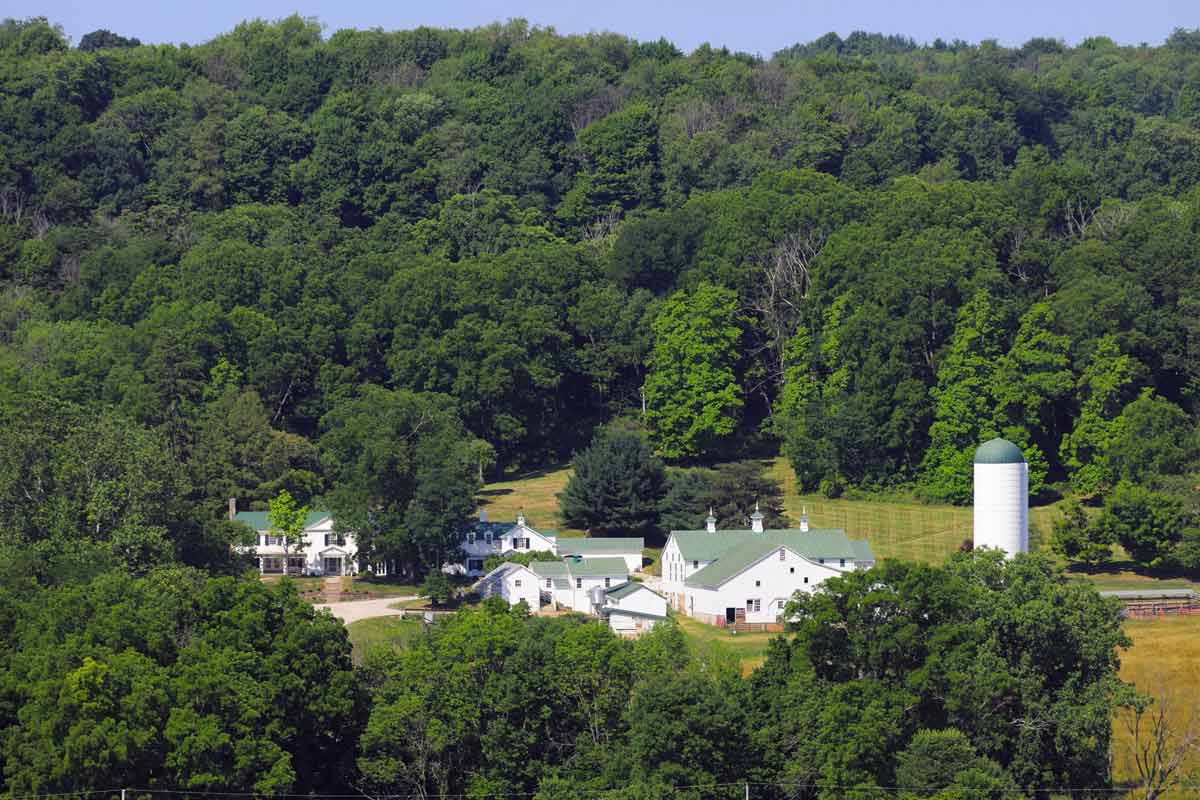 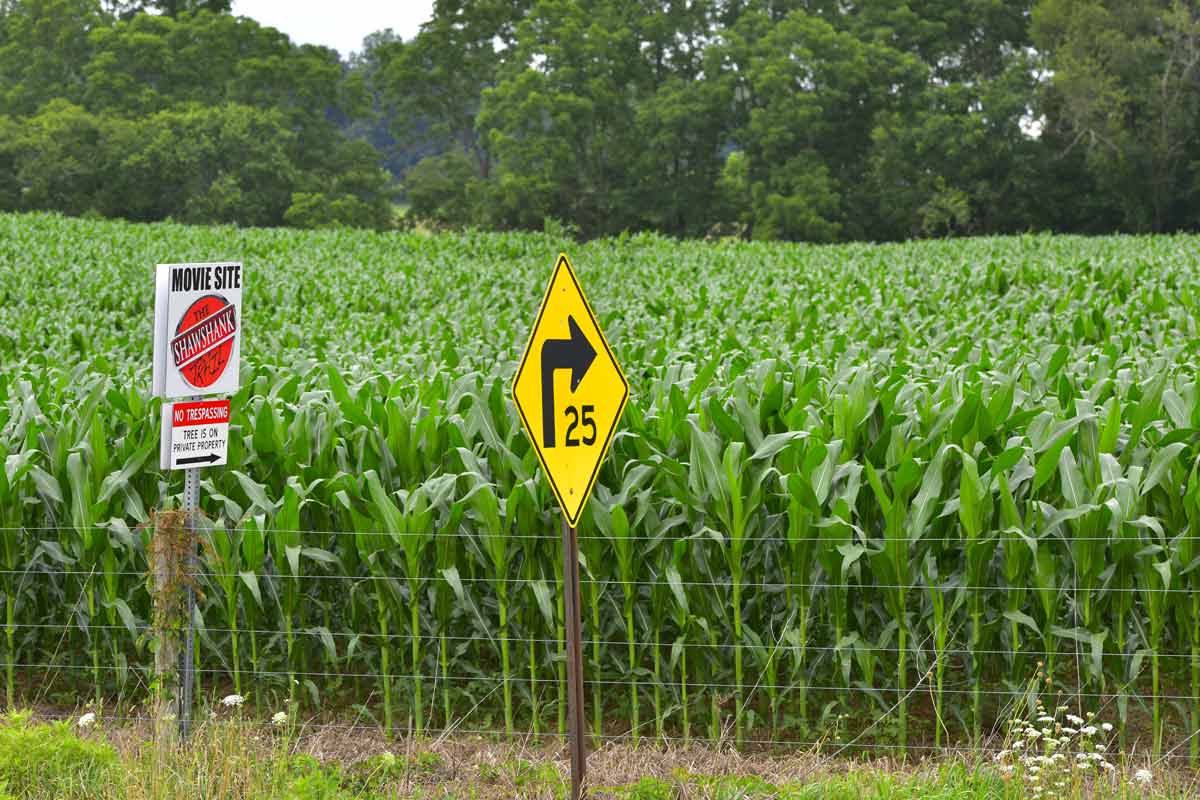 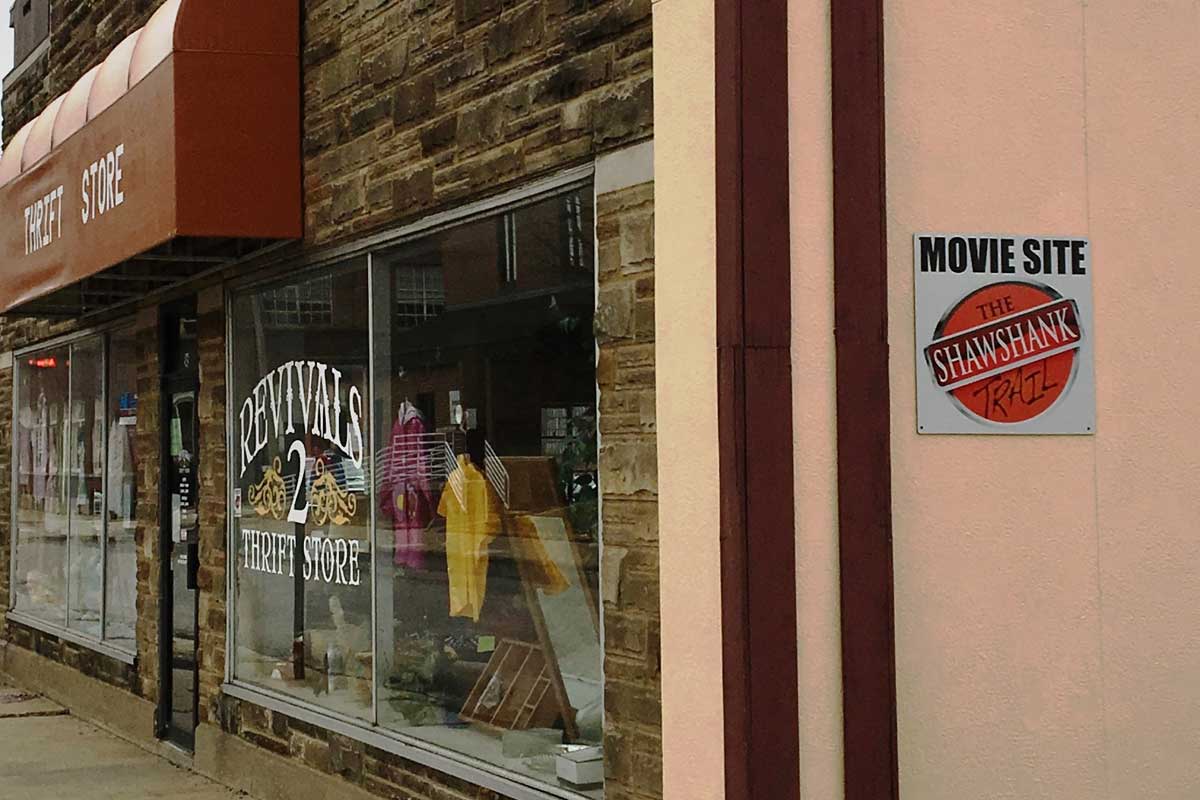 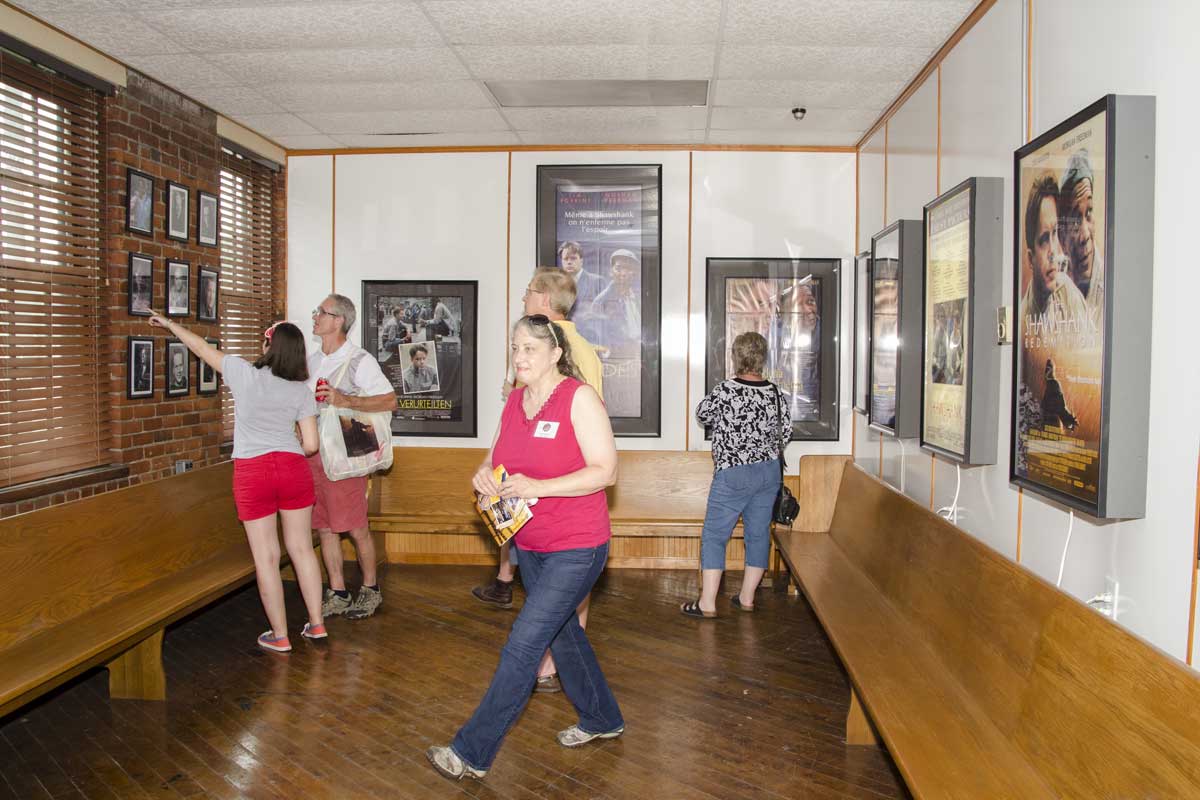 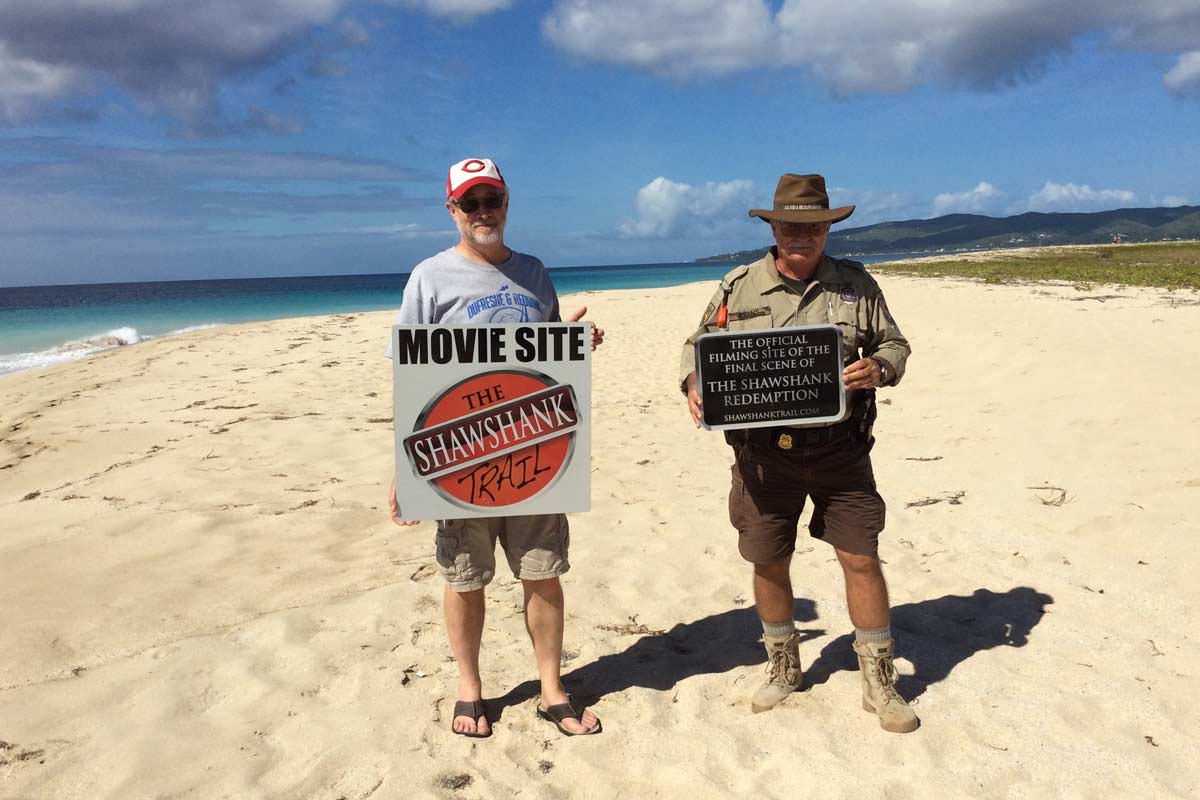 We hike the easy one-mile loop trail to Pugh Cabin on the grounds of Malabar Farm, where the opening scene of the movie was filmed both inside and outside. Adam stands next to where Andy sat in his car, turning over his revolver in his hands, just before he is wrongfully convicted of murdering his wife and her lover. The tall trees sway softly as we take in the surroundings.

Traveling to Ashland, we visit the Crosby Advisory Group building (standing in as the Maine National Bank in the film), where, after escaping prison at the end of the film, Andy leaves with a lot of Warden Norton’s money. Nearby is the Revivals 2 Thrift Store, where Red waited in line to purchase his bus ticket at the Trailways Bus Station to Fort Hancock on his continuing journey to see Andy. We call ahead as we travel 45 minutes west to make sure court is not in session before we arrive at the Wyandot County Courthouse in Upper Sandusky to see where they filmed Andy’s conviction. As we stepped into the courtroom, we could imagine Andy standing in front of the judge as he’s convicted of double homicide.

Just three blocks away, The Shawshank Woodshop is where the prisoners worked and where Red and the rest of the prisoners stop working to listen to Mozart. We wanted to see the inside of the building, so we called ahead to schedule a visit and tour with owner Bill Mullen.

Bill is a huge fan of The Shawshank Redemption and very down-to-earth. He chats with us as Adam checks out the posters and other movie memorabilia in the shop. Bill tells us about how he met Morgan Freeman, Tim Robbins, and director Frank Darabont. This is the last Continental US stop on the Shawshank Trail (the ending of the movie in Zihuatanejo, Mexico was actually filmed in St. Croix, in the US Virgin Islands. It’s the 15th trail location and yes, there’s a Shawshank Trail sign there too!).

We left the woodshop in high spirits. Adam and I loved every minute of the “behind-the-scenes” look at the movie while visiting Mansfield and the Shawshank Trail filming sites. We were blown away by the fact that we could see and touch places “Andy, Red, and Warden Norton” did. It was like we stepped right into the movie with each site we visited. I find myself itching for our next adventure as Adam gets in the car. I flip through the album on my phone at all the pictures we’ve taken, satisfied with our trip to Mansfield, Ohio. Afterward, I surprise Adam with a photo album to collect our photos from the trip—and the many more to come. Like Andy, I’m ready to get busy living.

Plan your visit to Mansfield and the Shawshank Trail